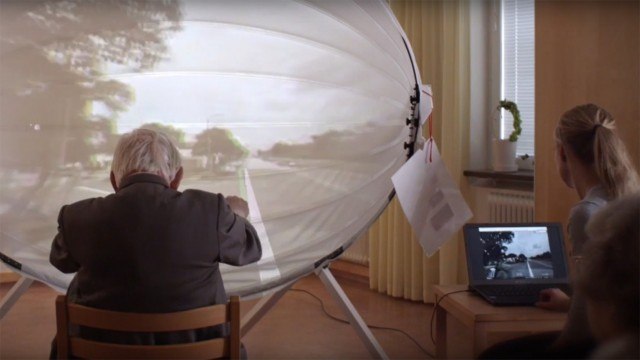 Technology is increasingly being used to implement new and exciting ways to help those living with Alzheimer's and other forms of dementia.

And now a Swedish firm has come up with a novel way of harnessing the potential of Google Street View to trigger memories and stimulate interaction and conversation with loved ones and carers.

The jDome BikeAround from Swedish company, Brighter, has developed an exercise bike connected up to a curved screen projecting street views of roads and places of personal significance to the user, which is now being used in over 50 centres in Sweden with great success.

A street is projected on a large, curved screen, positioned in front of an exercise bike. On the bike a man pedals and, as he turns, the view on the screen morphs to follow his direction. Beside the bike is a sign, reading “jDome. Cycling inside your memories.”

The jDome BikeAround, created by Swedish company Brighter, is designed to immerse patients living with dementia within a virtual replica of real-world streets – locations that have some personal significance and, the hope is, to kickstart a memory of a particular time or place: a walk to work. A walk home. A fight. A glance. A kiss. A sucker punch.

The street view is lifted from Google Maps, tinkered with enough to give the impression of responsive movement when cycling on the attached bike. The end result feels a bit like a video game – or a virtual-reality installation without the headset. Truls Sjösted, CEO of Brighter, tells me this interactive setup is intended to give a sense of agency to the patients.

“With this device, we can take the patients, put them in charge, go back to where he or she wants, and make him or her the guide,” he says. “The caregivers ask questions – ‘What's that?’ ‘Do you remember that?’ You get a conversation going. The patient gets activity, both physical and mental. They get less restless, meaning less need for medication. They sleep better.”

Sjösted explains that the curved screen is designed to socialise the experience of using the jDome. The emphasis is on conversation between dementia patients and caregivers, or loved ones. Using a VR headset may increase the sense of immersion, but the risk would be that it cuts the patient off from the real world. Tracing memories down familiar streets is part of the process, therefore, but not the endpoint.

The jDome is currently in use by over 50 centres in Sweden. It isn’t the only project to use gaming and virtual reality to help dementia patients. Non-profit organisation Alzheimer’s Australia developed a prototype VR forest using Microsoft’s Kinect sensors, while Alzheimer’s Research UK have made a VR app ﻿that simulates dementia – intended to give an insight into what it’s like to live with Alzheimer’s.

Find out more about jDome BikeAround at Brighter's website: brighter.se/jdome-en/ which features the introductory video below.

We use cookies on our website to give you the most relevant experience by remembering your preferences and repeat visits. By clicking “Accept”, you consent to the use of ALL the cookies.
Cookie settingsACCEPT
Manage consent

SAVE & ACCEPT
Powered by